During my five-year Indological studies at Jagiellonian University in Cracow, Poland, I gained in-depth knowledge of Hindi and Urdu languages. I had the privilege to master language skills during my scholarship in New Delhi, India, where after a one-year Hindi course I was awarded with Advanced Diploma in Hindi Language Proficiency, issued by the Central Hindi Institute.

I polished my Urdu language skills not only while living in India but mainly during my independent journey to Pakistan, where I was surrounded by Urdu native speakers on daily basis. Writing my master thesis was a continuation of my long-lasting fascination with the rich tradition of Urdu literary world as well as the social life of Indian Subcontinent. The thesis dealt with the image of political and social issues of contemporary Pakistan in women’s Urdu poetry.

Since 2011 I have been providing tutoring in Hindi and Urdu at all levels of advancement, from teaching the alphabets, grammatical structures to conversational classes. In April 2013 I conducted a demonstration Urdu class during Foreign Languages Night in Cracow at Jagiellonian University. In July and August 2013 I taught conversational Hindi course in the Baikal Language School in Cracow. 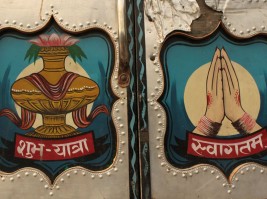 Since the 19th century two main styles of Hindustani became noticeable:  one was Urdu, packed with Arabic and Persian loanwords. The other was Hindi, using loanwords from Sanskrit and Prakrits. The grammar and basic vocabulary or Hindi and Urdu are nearly the same. Lexical and grammatical differences which prevent understanding appears in the formal and literaryform ofthe languages. The matter is further complicated by the question of different writing systems. Hindi uses the Devanagari script, whereas Urdu a modified Arabic alphabet.

These languages ​​are at the forefront of the languages ​​spoken by most users. The exact number of Hindi and Urdu speakers is difficult to determine. It is estimated that more than half a billion people in India speak Hindi as their mother tongue or as a second language. Urdu speakers in India are more than 50 million people. Farther, almost the entire population of Pakistan, more than 170 million inhabitants speak Urdu as a first or second language.